A velvety-black tanager with a bright lemon-yellow rump, the male Flame-rumped Tanager stands out in a crowd! The female is less conspicuous, grayish-brown above with yellow rump, lower back and underparts. Both have a bluish silvery beak. Flame-rumped Tanagers are found in scrubby areas, clearings, gardens and often near water. They associate in pairs or small groups, usually near the ground.

This species was formerly known as the Lemon-rumped Tanager (Ramphocelus icteronotus), and due to its bright yellow rump, this seems to be a more appropriate name for this bird in Panama. However, there are two subspecies of Flame-rumped Tanager—In Panama, subspecies R. f. icteronotus has a yellow rump. Further south in western Colombia, subspecies R. f. flammigerus has a flaming scarlet rump. The two subspecies hybridize where ranges overlap in western Colombia. It is also possible that the Flame-rumped Tanager hybridizes with Passerini’s Tanager in Bocas del Toro.

The Flame-rumped Tanager ranges from western Panama to western Ecuador. In Panama, they are found along the entire Caribbean slope lowlands, Canal area and in Darién. They are common around the gardens of the Canopy Lodge and Canopy Camp where they visit the fruit feeders, and can be found locally in Gamboa near the Canopy Tower and Canopy B&B. 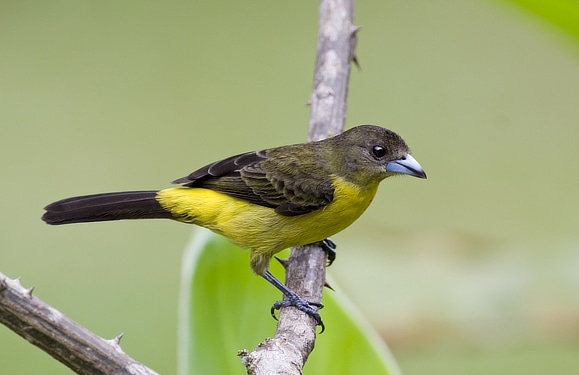