This warbler-like, charismatic antwren is one of the most energetic birds in the rainforest! The Dot-winged Antwren is one of the most widespread and well-known members of the antbird family. Almost always found in pairs or small groups, males and females are very distinct from each other—males are jet black with a wide white wing bar and conspicuous white spots on the wing coverts. Females have the same white wing markings, but have dark gray to black upperparts and bright chestnut underparts. Both male and female have a long, tapered tail with white spots on the tips, which they often flare when foraging. Young birds are brown above and cinnamon below. The Dot-winged Antwren is the only member of the genus Microrhopias, and there are 10 recognized subspecies, differing widely in plumage, especially the females. Two subspecies are found in Panama.

Seemingly always active, Dot-winged Antwrens are frequently found in mixed feeding flocks in Neotropical forests, and often associate with White-flanked and Checker-throated antwrens. They are found in the middle levels of humid forest and woodlands, and also like to forage in vine tangles and dense growth, where they glean small insects and arthropods from the foliage. They prefer areas of secondary growth, and are rarely found in primary forest. They can also be found foraging at forest edge. Dot-winged Antwrens are quite vocal; their song is a series of sharp notes that ascend in pitch then descend more rapidly. Like some other antbirds, when startled or excited, they flare a large, bright white patch on their back as a display of aggression, which could also be done during courtship display.

In Panama, Dot-winged Antwrens breed from February to July. The female lays two white eggs with brown spotting. Like many other antbirds, parental care is shared between both male and female, from incubation to feeding fledglings. Their nest is a small and deep cup, made with plant fibers and dead leaves, placed 1-12 meters high on a thin twig in dense cover.

The Dot-winged Antwren is found from southeastern Mexico to Bolivia and Amazonian Brazil. In Panama, it can be found along the entire Caribbean coast and on both slopes from the Canal area eastward to Darién, in the lowlands and foothills up to 1050 meters. The Dot-winged Antwren is most commonly found around the Canopy Tower and along Pipeline Road.

Similar Species: The male Dot-winged Antwren is similar to the male White-flanked Antwren, but has a longer, tapered tail with bold white tips, and lacks the white fluffy flanks; they often forage together, so care must be taken in looking at these key characteristics to tell these males apart. 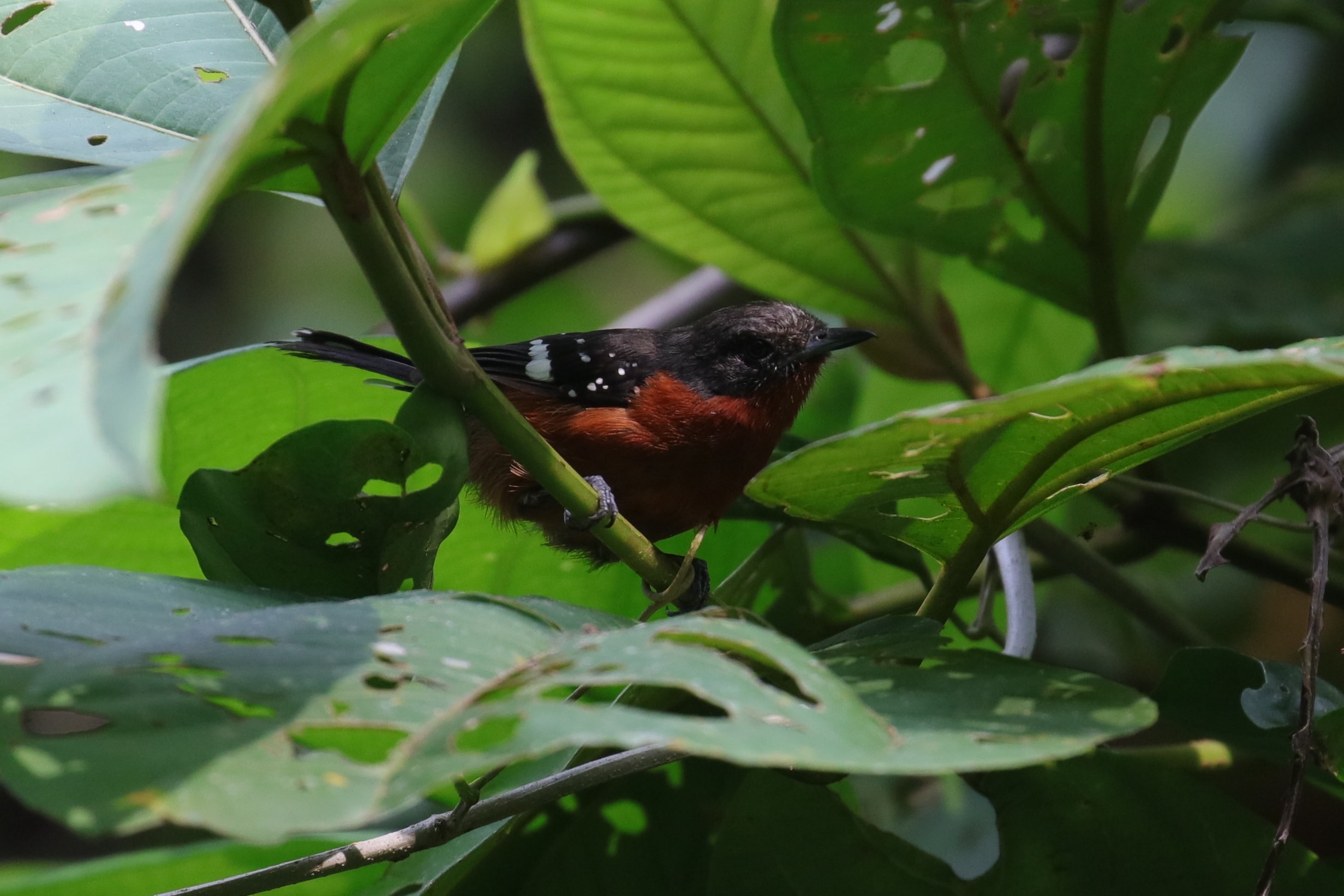