Birds of the Canopy Tower

This all-inclusive tour emphasizes the bird-rich lowland tropical forests of the Canal Zone. It features some of the best birding Central America has to offer!  Our base of operations will be the world-famous Canopy Tower with unlimited access to our fabulous Observation Deck every morning, afternoon and evening, where you can enjoy “canopy birding” at its best!  Excursions to some of Panama’s premier birding locations, including the world famous Pipeline Road, along with Semaphore Hill, Plantation Trail, Summit Ponds, the Panama Rainforest Discovery Center and its remarkable tower, the Chagres River, Gamboa and the marshy Ammo Ponds round out an outstanding week of birding.

Rates in US$ per person (+ taxes), double occupancy

Upon arrival at the airport, you will be met by our driver who will transfer you to the Canopy Tower, located at the top of Semaphore Hill in the rainforest of Soberanía National Park.  A member of our staff will greet you as you arrive at the Tower, and you will be provided with an orientation on the use of the facilities.  At this time we will answer any questions you may have.  As your luggage is being ferried to your room, you may visit the dining/bar area and enjoy a refreshing drink.  We highly recommend that you spend some time on the Observation Deck. The view from the platform provides some incredible Panamanian birding opportunities! Here, you get a unique eye-level perspective of the rainforest canopy. Many birds in the rainforest, including toucans, parrots, tanagers of various species, hawks, and dozens of others, as well as monkeys, two species of sloth, and other mammals are commonly seen. From this vantage point you can also see ships transiting the Panama Canal, the majestic Centennial Bridge, and miles of rainforest!  You may also want to watch the hummingbird feeders at the base of the Tower for Long-billed Hermit, White-necked Jacobin, Violet-bellied & Blue-chested Hummingbirds and White-vented Plumeleteer.  Occasionally, a Snowy-bellied Hummingbird is spotted! After all this Panama birding, dinner will be served at the CANOPY TOWER.

Your guide will be waiting for you at the Observation Deck for early morning birding. While you look for birds you can enjoy hot coffee, tea and orange juice. Some of the bird species that we may see from the observation deck are Green & Red-legged Honeycreepers, Green Shrike-Vireo, Blue Cotinga, Scaled Pigeon, Mealy & Red-lored Parrots, Keel-billed Toucan, Collared Araçari, Red-capped & Blue-crowned Manakins, a huge diversity of flycatchers and tanagers, and raptors including King Vulture and Black Hawk-Eagle!  After breakfast, at mid-morning, you’ll start exploring Soberanía National Park by taking a pleasant walk down Semaphore Hill Road.  This winding, shady paved road, festooned on its shoulders by wildflowers of many types, is a little more than a mile long and crosses a large creek about half-way down. There are some incredible Panama birding opportunities here, including birds from the forest interior as well as edge-dwellers. Olivaceous Flatbill, Plain Xenops, Lesser Greenlet, Black-breasted & White-whiskered Puffbirds, Fasciated & Black-crowned (formerly Western Slaty) Antshrikes, Slate-colored Grosbeak, Bay-headed & White-shouldered Tanagers, Black-throated & Slaty-tailed Trogons, Broad-billed & Rufous Motmots and even Great Jacamar may be found.  Great Tinamou is often heard but harder to see.  This road is also great for raptors, such as White, Tiny & Great Black Hawks. During migration it’s easy to see more than 10 species of warbler in one morning.  Your morning bird list will be impressive, as we catch a ride back just in time to enjoy a delicious lunch at the CANOPY TOWER.

The Ammo Dump Ponds are located just past Gamboa on the way to the Pipeline Road.  It is the best place to see the elusive White-throated Crake, as well as a host of other waterbirds.  Rufescent Tiger-Heron, Wattled Jacana, and Purple Gallinule are common, and Least Grebe and American Pygmy-Kingfisher are also resident.  In this area we often find Greater Ani, Red-legged Honeycreeper, Whooping Motmot (recent split from Blue-crowned), Yellow-tailed Oriole, Southern Lapwing, Anhinga, Yellow-crowned Tyrannulet, Scrub Greenlet, Lesser Kiskadee, Black-bellied Whistling-Duck, Panama, Social & Rusty-margined Flycatchers, and even Olivaceous Piculet! Panama birding is excellent here, and you’ll definitely add to your impressive list of birds! Dinner at CANOPY TOWER.

Summit Gardens is a center for recreation, education and conservation, dedicated to reflecting and enhancing Panama’s tropical and cultural diversity.  The botanical gardens are great for migratory warblers and other forest-edge species, including a colony of Chestnut-headed Oropendolas, Yellow-margined Flycatcher, Laughing Falcon, Gray-lined, Crane & Great Black Hawks, Collared Forest-Falcon, Tropical Pewee, Masked Tityra, Golden-fronted & Scrub Greenlets, Yellow-crowned Tyrannulet, Yellow-rumped Cacique, Giant, Shiny & Bronzed Cowbirds, and Blue Cotinga.  This park is the best place to find Streak-headed Woodcreeper, a difficult species to get elsewhere on this tour.  The Harpy Eagle is Panama’s national bird, and this park has an exhibit, including a life-size nest and interpretive panels, tracing the importance of the Harpy in Panamanian history and culture dating back to Pre-Columbian times.  Dinner at CANOPY TOWER.

After lunch, we take a short drive to Chagres River and the accompanying fields and forest. First, we must stop at the Canopy Bed & Breakfast in the picturesque village of Gamboa to look at the bird feeders!  With a beautiful backdrop of Cerro Pelado, the backyard at the Canopy B&B is teeming with bird life.  At the fruit feeders, we are likely to see Red-legged, Shining & Green Honeycreepers, Lemon-rumped, Crimson-backed & Blue-gray Tanagers, Thick-billed Euphonia, Yellow-bellied & Variable Seedeaters, Whooping Motmot, and Gray-headed Chachalaca, with Central American Agoutis lurking about under the feeders. Next, we’re off to Chagres River, the main tributary for the Panama Canal. The birding along the river banks and the forest edges of Gamboa Resort can be spectacular! Here, we search for Amazon, Green & American Pygmy Kingfishers, as well as Whooping Motmot and Cinnamon Woodpecker. We could also see Gray-cowled Wood-Rail, Cocoi, Green & Striated Herons, Wattled Jacana, Pied-billed Grebe, Anhinga, Royal & Sandwich Terns, Brown Pelican, Neotropic Cormorant, Tricolored & Little Blue Herons, Rufescent Tiger-Heron, Mangrove Swallow, Black-chested Jay, Lesser Kiskadee, Rusty-margined Flycatcher, Yellow-billed Cacique, Black-bellied & Buff-breasted Wrens, Fasciated & Barred Antshrikes, Cinnamon Becard, Slaty-tailed Trogon, White-bellied Antbird, and even Slaty-backed Forest-Falcon and Blue Cotinga at times! Dinner at CANOPY TOWER.

Today we will search for the area’s most sought-after specialties, from the Great Jacamar and the Pheasant Cuckoo to the Rufous-vented Ground-Cuckoo and the Harpy Eagle, both recorded here. Eight species of wren, 5 trogons, 4 puffbirds, 3 motmots, and many tanagers and flycatchers, including the unusual Brownish Twistwing, are often found.  Also, the calls of Streak-chested Antpitta and Black-faced Antthrush will lure us in!  Army ant swarms are found occasionally, attended by a host of birds including Bicolored, Ocellated & Spotted Antbirds.  Plus, we will hunt for Golden-collared, Red-capped & Blue-crowned Manakins, always high on a birder’s list of favorites!  Raptors include 3 forest-falcons, Tiny & Semiplumbeous Hawks, Ornate & Black Hawk-Eagles soaring overhead. Other residents include Carmiol’s & Sulphur-rumped Tanagers, Purple-throated Fruitcrow, Black-crowned & Masked Tityras, Cinnamon & Crimson-crested Woodpeckers, Scarlet-rumped Cacique, Red-lored & Brown-hooded Parrots, Collared Araçari, Speckled Mourner, Buff-throated Foliage-Gleaner,  Keel-billed & Yellow-throated Toucans, and Black-striped, Northern Barred and Plain-brown woodcreepers!  As we cross several rivers, we search for Sunbittern and Green-and-rufous Kingfisher.  To maximize our time in the field, we enjoy a nice picnic lunch along Pipeline Road—but with scope and binoculars at the ready!  After lunch, we search for more species, including the elusive Wing-banded Antbird, Spot-crowned Antvireo, Moustached Antwren, Ruddy Quail-Dove, and Marbled Wood-Quail!  Dinner at CANOPY TOWER.

Old Gamboa Road and the associated ponds at Summit are great places to find Canal Zone birds.  At Summit Ponds we will scan for Green, Striated, Capped & Boat-billed Herons as well as Green, Ringed, Amazon, Green-and-rufous (rare) & American Pygmy Kingfishers, which are all resident here!  We also seek out Rusty-margined & Streaked Flycatchers, Mangrove Swallow, Bat Falcon, Cocoa Woodcreeper and Lineated & Crimson-crested Woodpeckers.  Going straight past the two ponds you’ll be on Old Gamboa Road, one of the birdiest spots around.  This road passes through a variety of habitats and has plenty of specialties, including Blue Ground Dove, Great Antshrike, Jet Antbird, Black-tailed & Royal Flycatchers, Lance-tailed & Golden-collared Manakins and the delightful Rosy Thrush-Tanager!  We also will find species like White-bellied Antbird, Yellow-bellied Elaenia, Yellow-backed Oriole, Boat-billed Flycatcher, Yellow-headed Caracara and more.  Also resident are Gray-headed Chachalaca, with Spectacled Owl a real possibility too, as the guides know where they often roost.  Lunch at CANOPY TOWER.

Here, along the banks and in the accompanying forest edges, Amazon, Green & American Pygmy Kingfishers, as well as Whooping Motmot, Cinnamon Woodpecker, and Cinnamon & White-winged Becards, are resident.  We could also see species like Gray-cowled Wood-Rail, Green & Striated Herons, Black-tailed Flycatcher, Wattled Jacana, White-throated Crake and Anhinga.  There have been good sightings of Rosy Thrush-Tanager here recently as well.  Indigenous Embera trails lead from the river, and we often see Embera villagers fishing from their canoes.  In the river we search for Least Grebe, Muscovy Duck, and Black-bellied Whistling-Duck, and along their trails we sometimes find Little Tinamou, Scarlet-rumped & Yellow-billed Caciques, Yellow-tailed Oriole and even Blue Cotinga!

After breakfast we depart to the Panamá Rainforest Discovery Center, an ecotourism and environmental education facility created and administered by Fundacion Avifauna Eugene Eisenmann.  It is located off Pipeline Road adjacent to Soberanía National Park.  The center contains several attractions, the best of which is a 100-foot-tall observation tower, with 4 rest platforms—each stopping at a different layer of the rainforest.  The view from the top is incredible!  Here, we scan for raptors like Double-toothed Kite and Semiplumbeous Hawk and canopy birds like Scaled Pigeon, Pied Puffbird, and Blue Cotinga.  Also, we explore the 1.1 kilometer circuit of well-maintained forest trails, one ending at a pond, which is excellent for birds!  Snail Kite, Wattled Jacana, Little Blue Heron, Least Bittern, and Sungrebe are often resident at the pond, and along the trails we look for White-necked & White-whiskered Puffbirds, motmots, trogons, manakins, antbirds, wrens, tanagers, flycatchers, and many others. The covered Visitor Center has several hummingbird feeders (attracting many species that may be photographed easily), bathrooms, lunch tables and a small gift shop with drinks and snacks. Lunch at CANOPY TOWER.

This afternoon you have the option to relax on your own, catch up on some photography, or visit the Miraflores Locks Museum.  In addition to seeing first-hand the operation of the Canal, with huge container ships negotiating the narrow locks, you may also explore the world-class museum there. Magnificent Frigatebirds can be seen gliding overhead, so you won’t miss out on any Panama birding opportunities!

If time permits, after breakfast you may have one last look from the Observation Deck.  Then we take you to the airport for your return flight home, with awesome memories of birds, mammals, wildflowers, butterflies and everything else you experienced while birding at the Canopy Tower!

Please note that this itinerary may change without prior notice due to weather, alterations in habitat or other conditions.

The Canopy Tower is located in impressive rainforest atop Semaphore Hill within Soberanía National Park, 35 miles north of Panamá City in the Republic of Panamá right in the center of the New World— and just 2½ hours from Miami! It’s one of best locations for birding lodges in Panama. 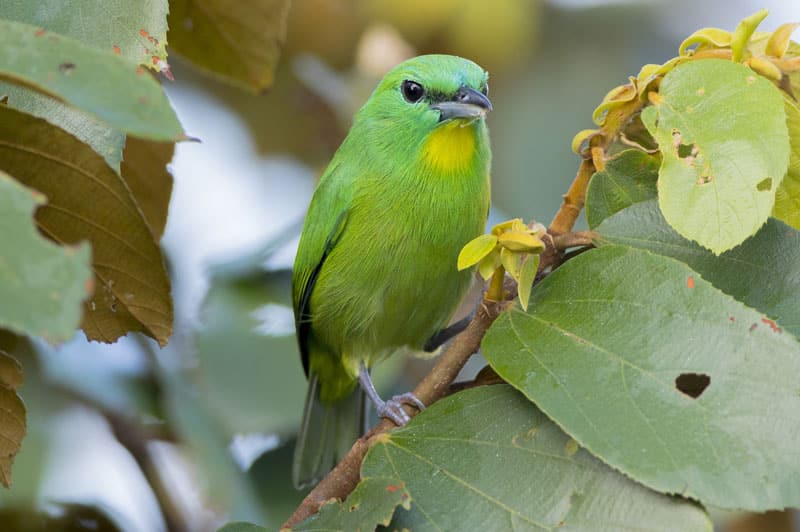 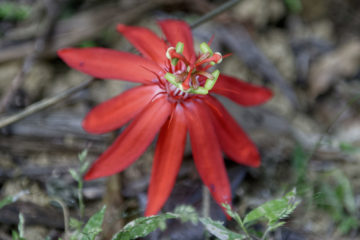 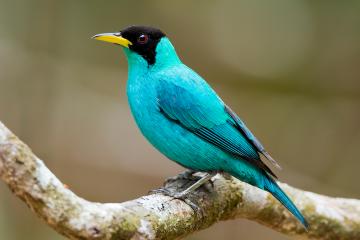 This is the tour for birders who
Canopy Tower
7 Nights 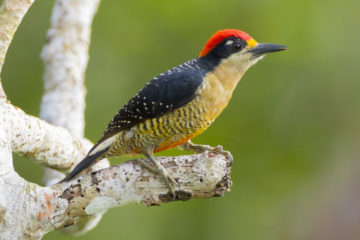 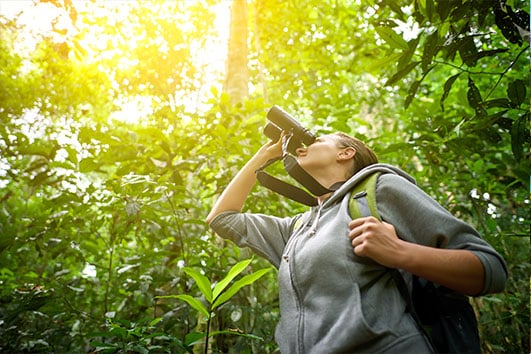